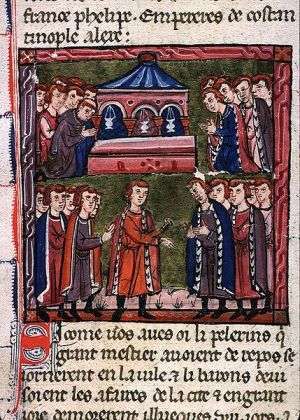 The Council of Troyes, historical study

There are those who spoke of the revolution of the Templars, and with reason because surely revolutionary act was to be able to reunite the figure of the Monk with that of the Knight, in an era of the early Middle Ages, in which the figures of the Oratores and Bellatores: those who prayed could not and should afford to do anything else, consecrating themselves entirely to God; just as those who fought had to protect only the mystics, the hermits, the monks, the Church and its clerics with weapons.

However, we prefer to talk about a great Traditional Restoration that brought back to the field men who were inspired by the ancient figure of the King-Priest: Melchizedek and Jesus Christ himself, both holding the symbols of the two Politico-military and Religious powers.

The great innovative intuition for the time of Hugone de ‘Pagani tended to create a new man who contained within himself the shining figure of the Knight of Christ, even His fellow soldier (as the name implies), to fight the Little War against the enemies external and the Great War against one’s sins and the devil; and the charismatic and sweet figure of the praying monk according to the indications of San Benedetto.

Christ, our Savior, came in peace among men but carrying with him the Sword of Justice: it is right that His Knights should do the same in His following and imitation defending the weak, the poor, the pilgrims, the children, the widows and unarmed religious.

Hugone is the only founder of a Religious Order recognized and supported by the Holy Roman Church who after his death did not at least become Blessed. For centuries, the reason for this situation has been asked.

Perhaps, being a Knight, he dared too much, he made believe that he wanted to create even another Church, parallel to the one formed solely by Clerics; went in clear contrast to the Gregorian reform of the Dictatus Papae, failed to fully and definitively understand the fundamental importance for the Ecclesia of a Monastic and Chivalric Order that was the Pope’s Sword and the Defense of the Lord’s Temple Jesus Christ.

The Order of the Temple he created was crushed, after 200 years of life, among all the powers coalesced to destroy it: the civil and political powers of the great nations in formation, France in primis, and the religious powers of the Papal Curia and of the Bishops, increasingly intolerant of these hieratic and mystical figures, but at the same time courageous up to the extreme sacrifice of the Knights Templar.

But let’s see how it was possible in Hugone, a poor Knight of Norman stock, coming from the Amalfi area of ​​Nocera dei Pagani to succeed in the fantastic enterprise of recognizing by Santa Romana Chiesa, always so refractory to novelties even if deeply traditional, an Order So singular and destabilizing chivalry of the Status Quo in the years following the conquest of Jerusalem in 1099.

The basic tools used were initially the Old Latin Rule consisting of 72 chapters and used to obtain the official recognition of the Order at the Council of Troyes in January 1129 and subsequently the “adapted” translation in French of oïl made under the Magisterium of Roberto di Craon on a date between 1135, Council of Pisa, and 1147, the year in which Pope Eugene III granted the Templars to carry the red Cross license on the white cloaks permanently.

The difference between the Latin and French versions is evident: the French text is a real translation of the Latin text; although the content is almost the same, the order of the chapters of the Latin rule is different from the French one. The French version is always followed by a list of feasts and fasts and retrais, a sort of Templar legislative corpus, with the task of responding to more practical and substantial needs than formal and erudite.

The primitive rule, that is, the one drafted in Latin, takes over from the canonical rule of Saint Augustine, which the Templars had followed in the first ten years of the Order’s life. The most important mentor of the new Order was undoubtedly Saint Bernard, at that time the spiritual guide of Western Christianity: his influence is evident in the content and final adaptation of the Rule.

The Latin Rule follows an order more in accordance with the dictates of the ecclesiastical environment from which it was to receive approval. In fact, its compilers come from a monastic environment, in particular Cistercian ones; in fact, it is very probable that the official editor, Fra Giovanni Michaelensis, was a Templar monk-knight.