Modern man, so apparently sure of himself and his progress and in his intimate, instead, so fragile, needs god!

From our Minister Templi Father Abraham

On the night of the Incarnation, the Gospels attest, while humanity slept the human sleep, God completed and defined, once and for all, the work of Creation with the work of Redemption that the Lord deliberately and freely assumed in the his flesh for the full happiness of his creatures.

Even today, the night of human sleep seems to extend, enveloping the minds and hearts of humanity with its torpor. Indeed, today that night seems to have reached its fulfillment: inside and outside the enclosure of Peter, that sheepfold whose door is one and must be crossed to find shelter and salvation (cf Jn 10: 1-21), man no longer a pilgrim but a wanderer, he seems to have forgotten his own “I” and traded his image and likeness to the Creator. But even in this night, made darker by Satan’s free-killing actions and by more and more than unaware they cooperate in his infamous battle, a Star keeps us awake and vigilant aware that the Sun has to come.

that in the flow of this time you realize that,

more than walking on earth,

do not take your eyes off the splendor of this star,

if you don’t want to be overwhelmed by the storm!

If you are beaten by the waves of pride,

look at the star, invoke Mary.

If anger or avarice, or the flattery of the flesh

they shook the ship of your soul, look at Mary.

If troubled by the enormity of sins,

if confused by the unworthiness of conscience,

you begin to be swallowed by the abyss of sadness

and from the abyss of despair, think of Mary.

Do not depart from your mouth and your heart,

and to obtain the help of his prayer,

do not forget the example of his life.

Following her you cannot get lost,

by praying to her you cannot despair.

If she supports you you won’t fall,

if she protects you, you don’t give in to fear,

if she is propitious to you, you reach the goal.

As a caring Mother, attentive to details, available to grace, guardian of the secret heartbeats of the Divine Son, she continues her maternal work of correction, concern and consolation towards all of us her children in the Son. Let us turn our ears and hearts to her who still points us to the person of Christ, her Son and Lord, the goal to which we can lead joys and sorrows, trials and glories, sufferings and desires for good. Let’s not reduce our devotion to She who, the poet sings, is “a lively fountain of hope” and “in whose womb love is rekindled” (ALIGHIERI D., Divina Commedia, III, XXXIII) to rituality without existence.

As Mary disposed her body and soul so that the Word of life would dwell in them, so let us imitate her: incarnating in unity, keeping them in the sacred cloaks marked with the Seal of the Lamb and the oaths made, the Gospel and the Faith.

Under the supervision and maternal protection of She whom we received freely from the wood of the Cross as Mother and Sovereign (cf Jn 19:26), in the living communion of Saints and Blessed who, looking to Christ, shine with the Light that unravels darkness, safe behind God’s Amen (cf Rev 3:14) to whom we have been called and from Whom we never want to separate or flee, as did Adam and Judah and many others without return and without life.

If this also happens, the Fraternity that binds us, much more than the human and bloodthirsty brotherhood, with its prayer and closeness, its correction and indulgence remind us of what Saint Augustine proclaims and the Liturgy sings over the centuries up to us. : “O felix culpa, quae talem ac tantum meruit habere Redemptorem” (“Happy Fault who deserved us such and such a great Redeemer”).

This is the method for a fulfilled present life and the reward of happiness that awaits us in the Kingdom: the Mercy of God who, slow to anger and great in love “(Ps 102, 8) draws the sinner to repentance, from repentance to conversion, from conversion to witness, extinguishing in the heart the despair and that ephemeral unworthiness that leads to separation from God and introduces sin that will never be forgiven neither in heaven nor in earth (cf. Mt 12, 32).

Let us not tire of announcing it with the humble but sure word: our life is stained by sin but it is redeemed by the Blood of the Lamb who redeemed the world with His Holy Cross and Resurrection.

We are no better than anyone; indeed, we most sinners of all! But with the awareness that Christ has saved us from despair and permanently, he extends his hand to all those who humbly feel the need for his Presence and saving power: “Dòmine, non sum dignus ut intres sub tectum meum; sed tantum dic verb set sanàbitur ànima mea” (“Lord, I am not worthy for You to enter under the roof of my house but of one word and my soul will be healed “- cf Mt 8: 8).

He who promised, One with the Father and the Spirit, through the voice of the prophets: «Even if your sins were like scarlet, they will become white as snow. If they were red as purple, they will become like wool. 19 If you are docile and listen, you will eat the fruits of the earth. 20 But if you persist and rebel, you will be devoured by the sword, because the mouth of the Lord has spoken “(Is 1:18) -19), he will never fail his Covenant.

Let’s open our Heart to him!

Let it be invaded in its totality by the Charity that is Christ (1 Cor 13), which alone will propel us forward.

Let it assume the thought of Christ (cf 1 Cor 2:16), renouncing the little that we are, we will rediscover the whole of what we have been made partakers of.

Let’s open up your life!

Let us remember, whatever happens: “None of us, in fact, lives for himself and nobody dies for himself, because if we live, we live for the Lord, if we die, we die for the Lord. Whether we live or die, we are therefore the Lord’s “(Rom 14: 7-8).

Imprint the Amen, He who was, is and will be, at the end of our days, his seal welcoming us as last in the ranks of our holy fathers, valiant intrepid knights of God, who have fought the good fight, finished the race and kept Faith (cf 2 Tm 4 7).

Modern man, so apparently sure of himself and his progress and in his heart, however, so fragile, needs God!

Only if we know how to let ourselves be grasped by him; if without fear we will know and want to go where he, through his Bride – the Church – will show us; if we know how to remain humble and without human pretension; if we know about him, then we will be able to answer the echo of the ancient question “Who will I send? And who will go for us? ” (Is 6, 8a) with the same voice as the prophet: “Here I am, send me” (Is 6,8b). It is not the time to “smell like sheep”: it is time to smell of Christ

“O God, our refuge and our virtue, look with kindness at your servants who invoke you: through the intercession of the glorious Mary Immaculate, Virgin and Mother of God, of St. Joseph her husband, of your holy Apostles and of St. Michael the Archangel, hear, You who are good and merciful, the prayers that we address to you for the conversion of sinners, the freedom and triumph of Holy Mother Church.”

Already 2.000 people have made this choice! Click here and find out how to become a Templar 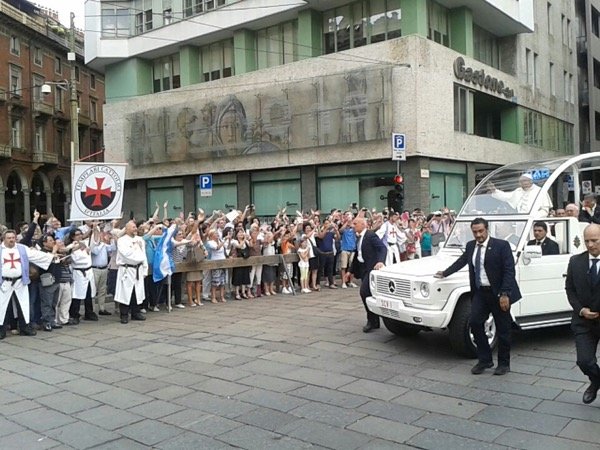 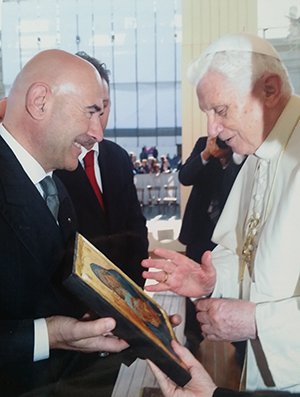 12-13
October 2013 –
St. Peter’s Square (Vatican City) – The
Catholic Templars on the occasion of the consecration of the world
To the Immaculate Heart
Mary with Francisco